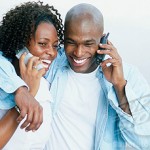 While the Bible denotes no set timetable as far as how long a couple should date before marriage, practical wisdom tells us that the more time you spend with someone, the more you are able to get to know the other person for who they really are.

I have talked to many women who claim they didn’t marry the same person they dated, but when you ask them how long they dated before marriage their normal reply is less than six months.

After dating someone a year or longer you should have a more specific idea about the other person’s character.

True relationships, which begin with friendship as the foundation and eventually blossom into becoming each other’s best friend, take time to develop.  As the saying goes, “time will tell,” so let time tell on a person.

You need time to get to really know each other in order to pray through the relationship, collect data, be led by the Spirit, and follow peace.  You need time to see -should a situation arise where your two may not agree on something or you may be challenged – how your date responds.  Does he go into a rage?  Or is he calm and considers a matter before responding? Men, if peace is an important factor in choosing a wife, and she goes off on you and on other people seemingly at the drop of a hat, then you may want to ask yourself if this is the type of person you want to have to deal with for the rest of your life. During the relationship, you both want to obey the Word when it says,

Wherefore my beloved brethren, let every man be swift to hear, slow to speak, slow to wrath: James 1:19

…let the relationship develop naturally, and not based on your own personal timetable (somebody shoot the biological clock! Lol)  Sometimes when we do it based on our own timetable, we overlook a lot of flaws about the other person that we shouldn’t overlook because we feel like we’re trying to get to our goal of marriage by a certain age.

Don’t fall into that trap.  Like the song says, “Step back and let God do it.”

No matter how old you are right now, no matter how much you may have thought you would have been married with 2.5 kids by now, ladies, don’t get into a rush to marry the first man that comes along and says he’s saved.

Don’t view time as an enemy. Time is your friend. If a person asks to marry you now, and you ask him to wait, then more than likely if he really loves you, he isn’t going anywhere.

The following were mainly excerpts from Chapter 3 of my book, How To Date and Stay Saved.