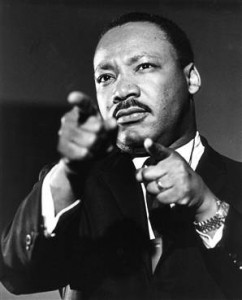 Dr. Martin Luther King Jr. is undoubtedly one of my greatest heroes.

He was a God-fearing man known for his integrity, compassion for the underprivileged, desire for equality among the races and harmony amongst everyone.

He stood on principle and conviction and held stedfast to his belief of non-violence as the key to any success and any thing else would just lead to violence, disarray and destruction.

King demonstrated that love not only in his home, amongst his friends and peers but also in the world.

The Word of God says in 1 John 3:18 My little children, let us not love in word, neither in tongue; but in deed and in truth.

King demonstrated his love not only with his words but through his actions.

His spoken convictions gave him and others the strength to march which led to a movement that ultimately changed a nation.

His words and actions made a difference in countless lives of others as we continue in the struggle for equality.

This King Day, as women of God I’d like to encourage you to honor the ‘kings’ in your life.

Whether it’s your father who decided to be there for you and raise you like a real man should, a mentor or minister who prays for you and services your spiritual needs, an uncle who has spoken words of encouragement over your life – let’s show them honor by offering our own “Thank You’s” and words of encouragement, or cooking them a nice meal, or even a simple out of town phone call “Hello.”

So often men, especially black men, hear so many negative things about them that not much time is taken to accentuate the positive.

So speak life over the ‘kings’ in your life, which will help give birth and/or cultivate the king in them.

for he is Lord of lords, and King of kings: and they that are with him are called, and chosen, and faithful. Revelations 17:14b

Death and life are in the power of the tongue: and they that love it shall eat the fruit thereof.
Proverbs 18:21