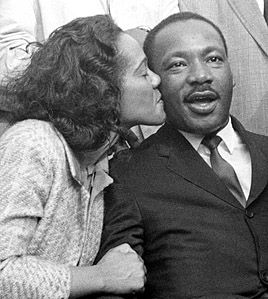 She then went on to say that the more she went out with him and got to know him, the more she liked him. She discovered that his life’s mission to fight for freedom and equality was similar to hers. Already an accomplished concert performer, having graduated from Antioch, Coretta was asked by Dr. King if she could see herself married to a Southern minister. She figured that if she did, she would have to take on
the role as a preacher’s wife and he would want a wife to come home to, and not one off traveling doing concerts in different countries. So she had a choice to make.

Not only was she able to accomplish her dream in assisting him with the fight for
equality, but a lot of times as they toured different countries, such as their trip
to India in 1959, she was invited to sing for many groups in cities, towns, and villages
throughout India. Hence both their dreams came true – together. (Vivian, Octavia.
Coretta, The Story of Coretta Scott King. Mnneapolis, MN: Augsburg Fortress, 2006.)

Ladies, talk about that man’s life mission, and see if you can “see yourself” fitting
into that puzzle being his helpmeet.

Try not to write someone off because of superficial attributes one can’t change such as
their height or complexion.  As believers, we’re supposed to be more concerned with the
heart, right? But how many people actually take that into consideration when choosing a
mate?

In doing so, you may meet and marry your dream man or woman, and you two can then make
each other’s dreams come true together.