He’s Fiiiiine…but is He Saved?

You may have heard that from one of your girlfriends in reference to a fine man, or you may have said that to yourself while checking a good-looking brother out.

This phrase stems from the title of a Christian fiction novel penned by a Detroit native with a dream turned National Bestselling Author, Kim Brooks. 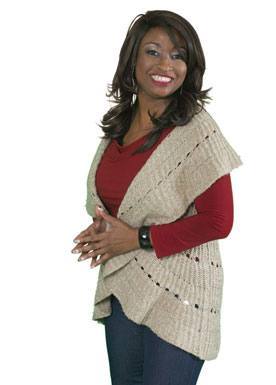 Upon publication of Kim’s debut novel, The Detroit News endorsed it as, “… a Terry McMillanlike novel with a Christian twist” by comparing it as a Christian version of the novel phenom turned movie, Waiting to Exhale.

Not only is Kim the Black Expressions Bestselling author of, He’s Fine…But is He Saved? She authored its sequel, He’s Saved…but is He For Real? and her latest novel, She That Findeth (published by Atria Books, a division of Simon & Schuster) which is romantic comedy about what happens when a 35-year-old single woman gets tired of waiting on God for a husband and sets out to find one herself. Many readers relate to the main character, Shenita Love’s, plight and struggles.

Not only do readers relate to Shenita Love’s story, Kim Brooks is all too familiar with it as well. An unmarried woman and a virgin in her thirties, Kim freely shares her personal experiences along with the Word of God in order to promote abstinence until marriage, to youth and adults alike, as the best way to the healthiest form of a relationship – one that is built on a foundation of true love, respect, and trust.

An English graduate of Michigan State University, a full-time licensed, itinerant minister, and a published author for over a decade, Kim also publishes non-fiction books including, Singles, Overcome!, How To Date and Stay Saved, Get Over Your Ex in One Weekend, Faith in Broken Places, and more.

Kim Brooks’ ministry and message is spread throughout her books, blogs, songs, articles and poems and has been heard on airwaves nationwide including Rhythm and Praise with Pastor Marvin L. Winans, Strong Inspirations with Dr. Deborah Smith Pollard, The Praise Party with Ace Alexander, Rejoice Musical Soulfood, and many others.

As the founder of Kim Brooks Ministries International and President of Driven Enterprises, LLC headquartered in her hometown of Detroit, Kim also publishes an eZine, The Single Heart, and a free online daily devotional that consistently ministers to thousands globally.

With a high-energy, down-to-earth joyful approach while uniquely blending practical wisdom with God's Word, Kim Brooks' powerful message, which brings hope and healing to the nations, is that it is possible to live an exciting, uncompromising, drama-free, purpose-driven, Spirit-led, victorious life in the perfect will of God!