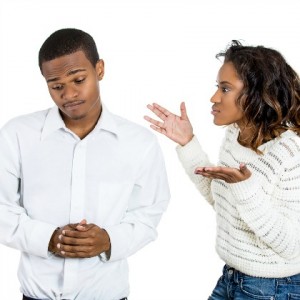 You know you’re only going out with him because he’s cute and saved.

Aside from that, there’s really not much of a connection – yet you still go out with him week after week, thinking, maybe, just maybe – that ‘something,’ that ‘chemistry,’ that ‘connection’ would just appear, yet week after week it’s only confirmed more and more how you two AREN’T made for each other.

In my new book, How To Date and Stay Saved, there’s a section in which I talk about how you should know (or have a clue) about what you’re looking for in a mate before you start dating. Here’s a tip, the more you know yourself, the more you know what character traits you need in a man. For example, do you need a man who is protective, caring, and not argumentative because part of the vision for your life and future family is to grow up in a peaceful home? Do you love to talk and express yourself and feel you need a good, active listener in your life? Do you need emotional support?  What do you need? What are you looking for in a mate?

I’m not talking about a list of 100 things, or superficial things which don’t last such as one’s looks (not saying he has to look like a monster, he can be pleasing to your sight, just don’t let that be the ONLY thing you look at when selecting a mate) what character traits do you want him to have – name at least 10 things that are ‘must haves’ (i.e. he ‘must have’ a personal relationship with God), and 10 things that are ‘can’t stands’ i.e. character traits you can’t stand about a person.

For example, if you “can’t stand” someone who complains all the time and is a pessimist, list that. That way, if you come across someone like that, you’ll know right away that they’re not for you – especially if they keep complaining about everything over and over again – sometimes it does take 3 or 4 dates to see if the person’s complaining is just a result of a ‘bad day’ or if it’s really a part of his character. So observe that, and if they keep complaining, or keep doing that character trait that gets on your nerves as you consistently speak to them on the phone and also in person, then end the relationship! It’s O-kay!

It’s better to end it sooner than later, because later more feelings could get involved or someone could end up getting hurt. End it instead of making excuses for the person about how they’ll change one day and how God is working on ‘im…only God can change a person, and the person has to INVITE God in to have Him do the work. Not everyone is willing to change who they have already become.

It’s alright to just be friends with someone you know isn’t a match for you, because if he gets on your nerves now, just think how much more he’ll get on your nerves if you decide to marry him.