Ciara Keeps Her Goodies from Quarterback, Russell Wilson Until Their Wedding Day 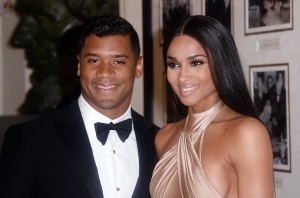 WASHINGTON, DC – APRIL 28: Russell Wilson from the Seattle Seahawks and Ciara Harris arrive for the State dinner in honor of Japanese Prime Minister Shinzo Abe And Akie Abe April 28, 2015 at the Booksellers area of the White House in Washington, DC. (Photo by Olivier Douliery/Getty Images)